Four American airmen who were killed when their aeroplane crashed in a field in Blackmore on 24 September 1944 are to be commemorated on a Memorial to be placed in St Laurence Church.  It will be a visible and permanent reminder of the brave contribution made by 30,000 American Army Air Force personnel stationed in Essex between 1943-45.

Neil McCarthy wrote in the September 2019 edition of ‘Church Matters’, the parish church magazine, “It was on the evening of 24 September 1944 that a Martin Marauder B26, attempting to reach its base at Matching Green while returning from France in appalling weather, disintegrated on impact in a field adjacent to Fingrith Hall Lane.  Two other planes in the same homeward-bound squadron also crashed elsewhere in Essex that night in almost identical circumstances as the Blackmore crash”.  See also: https://blackmorehistory.blogspot.com/2008/12/blackmore-notes-and-queries-3-americans.html

The unveiling date of the Memorial has yet to be announced as Faculty (the permission to make changes to the church structure) has only recently been granted.  The wording, as commissioned, on the wall mounted plaque reads:

To the glory of God and in commemoration of
The United States Army Air Force Stationed at Essex Airfields
During World War II who died so we would remain free
This plaque is dedicated to the memory of
FIRST LIEUTENANT RICHARD E. BAEHR
FIRST LIEUTENANT FRANK I. YAWITZ
STAFF SERGEANT EDWARD G. DEMYANOVICH
CORPORAL JOHN M. MYERS
Of the 391st Bombardment Group who were killed
When their aircraft crashed in a Blackmore field
On 24th September 1944

Posted by Andrew Smith at 00:00 No comments:

Blackmore.—The renovation of the church of St. Lawrence, which has occupied four years, is at length completed, and the restored building was publicly dedicated by the Bishop of St.. Albans on 9th June. The improvements include the entire re-framing of the roof of the nave, the re-building of the north arcade, re-erection of the north wall, renewal of the aisle roofs, and alterations in the chancel, new oak choir stalls, pulpit, lectern, and screen. A new organ and three painted windows have also been placed in the church. All the bells have been re-hung, and the tenor bell is re-cast. The unique spire and timber tower, which Mr. Chancellor has described as “the glory of Blackmore Church” (see E.R. viii. 65> 86), have been practically rebuilt, the old wood being utilised: as far as possible. A reference to the illustrations in Mr. Chancellor’s article above referred to, will show its peculiar three-storied character, which, with the dormer windows in the roof of nave, rendered the old priory church “a magnificent piece of carpentry.” Its dilapidated condition may be surmised from the fact that £2,500 has been expended on the restoration,, which has been carried out under the direction of Mr.Chancellor, in accordance with the historical associations of the ancient building. A strip of land has been given by Mr. T. R. Hull for enlargement of the churchyard. Altogether the sums given and collected are noteworthy in so small a parish, and are due chiefly to the untiring efforts of the Vicar, the Rev. W. L. Petrie
Posted by Andrew Smith at 00:00 No comments:

Blackmore.—A new organ in the Baptist Chapel was opened on April 27th, 1892, under the presidency of the Rev. G. Stevens, pastor.
Posted by Andrew Smith at 00:00 No comments:

The Essex Record Office has announced that Parish Registers in their keeping have now been indexed making it even easier to search entries and ancestors: http://www.essexrecordofficeblog.co.uk/time-for-an-index-essex-record-office-in-partnership-with-ancestry-com/
Posted by Andrew Smith at 06:52 No comments: 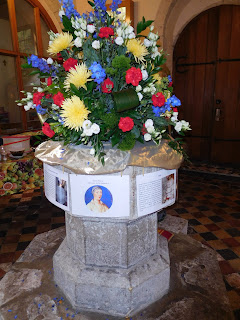 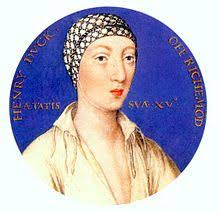 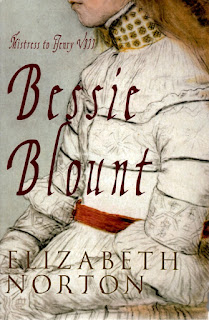 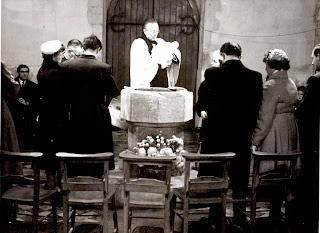 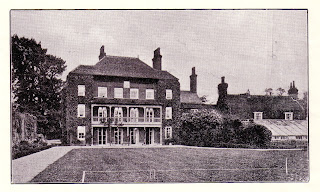 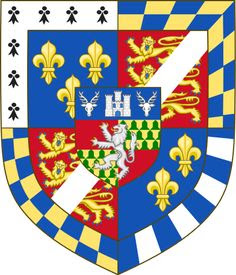 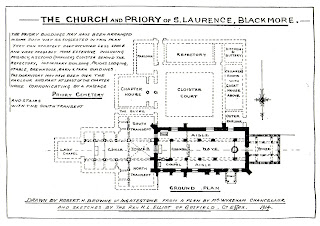 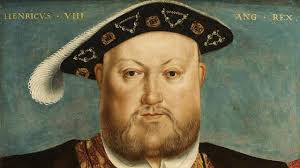 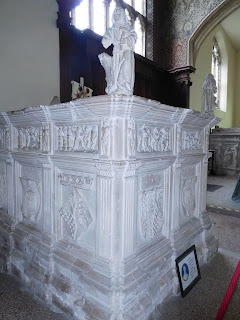 Posted by Andrew Smith at 06:52 No comments:

Hello  I am trying to find out some details of the Tucker family and Copyhold Farm, Blackmore.  The 1901 Census shows them as living in Cornwall.  The 1911 in Hertfordshire.  In 1903 there was a birth at Copyhold Farm, and two deaths one in 1905 and 1906.  I think that they may have leased the farm but any information that you may know would be greatly appreciated.  As I live in Western Australia, it is difficult for me to visit the Essex Records Office and I find their website unhelpful.
Many thanks
Kind Regards
Lyn Tucker

Posted by Andrew Smith at 09:38 No comments:

The results are in. My wife bought me an Ancestry DNA kit for Christmas, perhaps to settle a query as to how much local heritage I have. Knowing that on all four sides of my family my relations were born within the last 200 years, probably, not further away from where I live in the Colchester area, Middlesex and Cambridgeshire there was always a question as to whether my family jumped the English Channel in 1066.  The results are as expected except an indication of Norwegian or Swedish heritage.

Do please share any comments you have about DNA testing.  We are interested here to learn from those who have done the test, not the outcomes of paternity suits. 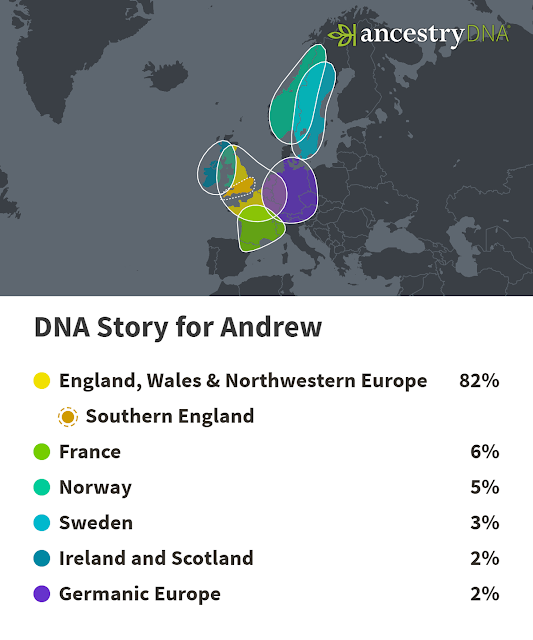 Posted by Andrew Smith at 07:44 No comments:

Email ThisBlogThis!Share to TwitterShare to FacebookShare to Pinterest
Labels: personal

The public house formerly known as The Wheatsheaf, for some while derelict, is currently being demolished. This photograph taken just after 7.00am today. 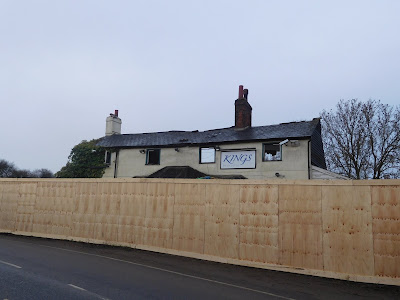 Posted by Andrew Smith at 19:39 No comments:

Blackmore Village Hall is fifty years old.  It was officially opened on 22 January 1969.  These documents, from the archive of the then Vicar Revd. Montague Knott, show the agenda for the opening event and the prayers of dedication. The final document is a Newsletter of events coming up. 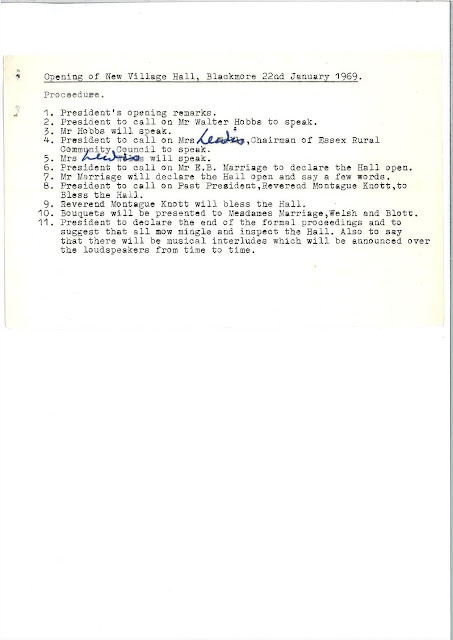 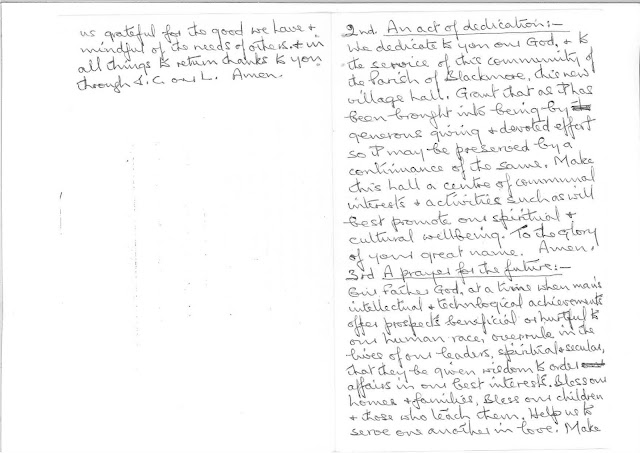 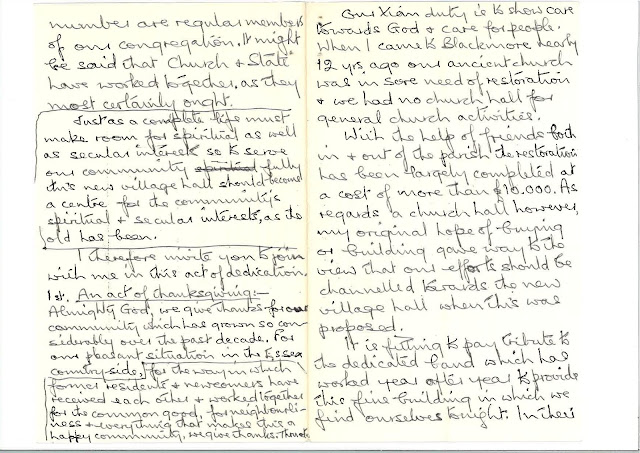 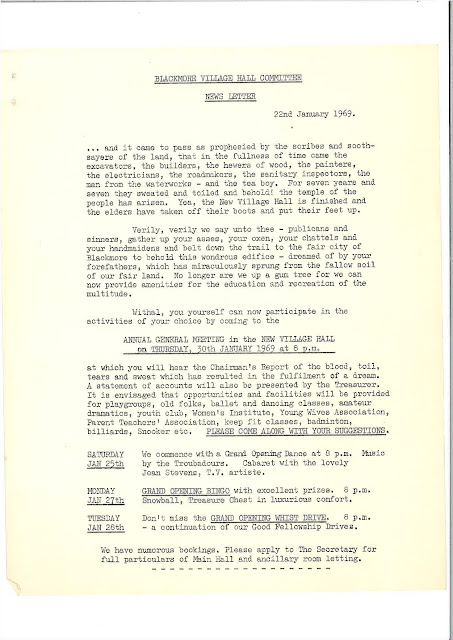 Posted by Andrew Smith at 11:07 No comments:

Fifty years ago, on Sunday 22 December 1968, Revd. Monty Knott led a traditional Carol Service at Blackmore.  This is the Order of Service. 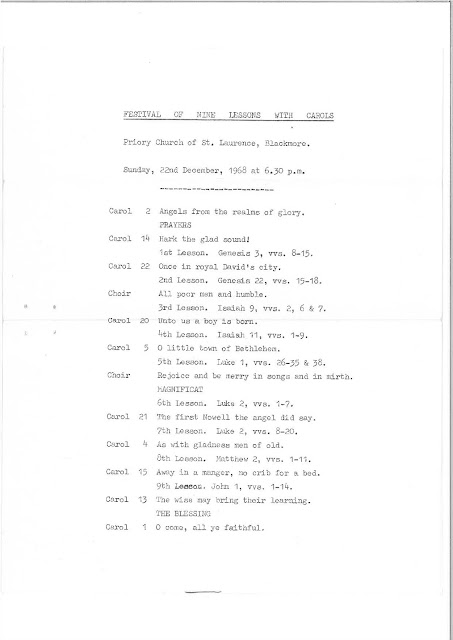 Posted by Andrew Smith at 08:33 No comments: 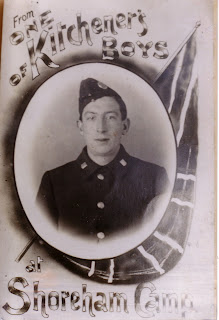 The Poppy Trail and Display in the churchyard of St Laurence, Blackmore, has attracted many visitors over the last fortnight.  Many have commented that it is a "moving tribute" to those who served in the First World War, whose Centenary of its ending was marked on 11 November.  Photographs taken this afternoon.  This is the last opportunity to see the work before it is dismantled on Wednesday 21 November. Can be seen during the shortening daylight hours. 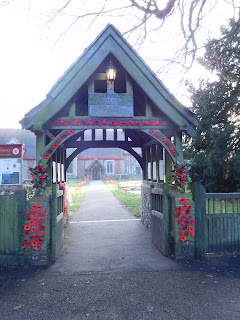 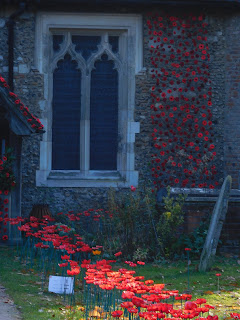 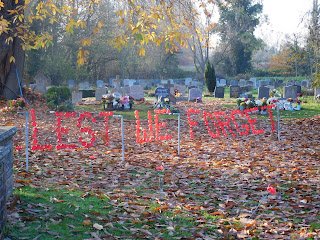 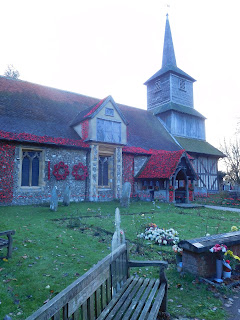 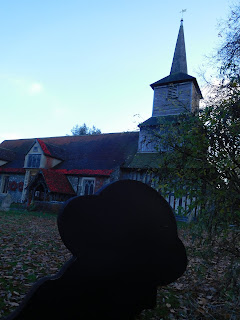 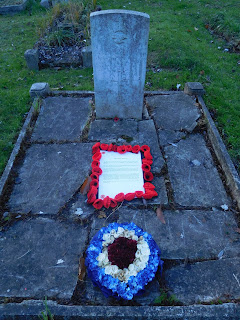 Posted by Andrew Smith at 15:19 No comments: 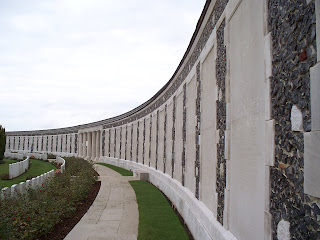 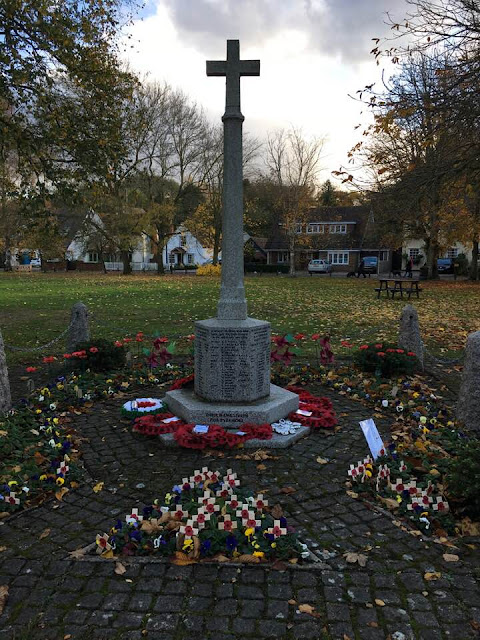